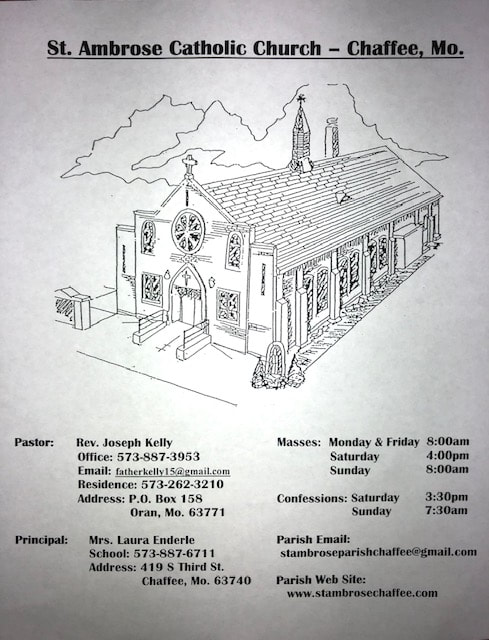 Holy Hour for Vocations on Mon. Feb. 13 at 7pm at St. Mary’s, Cape. Time of quiet prayer for holy vocations and discernment of God’s call.

Fr. Kelly: Catholic Schools Week and St. Thomas Aquinas
Beginning this Sunday, January 29th through this Friday, February 3rd, we observe and celebrate Catholic Schools Week!  Since 1974 Catholic Schools Week has been celebrated across the nation with special observances such as Masses, fun activities, honoring our teachers and students, and ultimately giving thanks to God for the opportunity to have a Catholic education.  As we observe Catholic Schools Week, I’d like to point out one of the patron saints of students, St. Thomas Aquinas, whose feast we celebrate on January 28th.  St. Thomas Aquinas, the great medieval Doctor of the Church, was born in the town of Aquino, Italy, near the great abbey of Monte Cassino in 1225.  He was born to a noble family.  As a boy of five he began his schooling at the Benedictine monastery at Monte Cassino.  In 1239, he began studies at the University of Naples.  There, Thomas studied many of the ancient philosophers, including Aristotle, who became very influential in his philosophical thinking.  He became friendly with the Dominicans and wished to become a member of their community, but his family opposed these desires.  In 1244, his brother led a troop of soldiers and forced him back to the family castle where he was confined for two years.  During that time, family members used every method to dissuade him from his goal, including sending a prostitute to seduce him, whom he drove away with a fire brand!  Eventually, his family permitted him to become a Dominican.  He would study under St. Albert the Great who became a tremendous influence on his life.  His quiet and slow manner caused his confreres to call him ‘the dumb ox.’ St. Albert retorted: ‘You call him a dumb ox, but soon his voice will be heard through the world.” St. Thomas was ordained a priest in 1251.  He became one of the Church’s greatest theologians and thinkers, writing volumes of theological and philosophical works.  Even King Louis IX of France sought his wisdom and guidance.  In 1273, one year before his death as he was working on his greatest work, the Summa Theologica, St. Thomas had a deep, prayerful experience and afterwards said to one of his confreres, “All that I have written appears as so much straw compared to the things that have been revealed to me.”  It was evident he had a vision of heaven.  Near the end of his life, someone witnessed St. Thomas Aquinas kneeling before a crucifix and heard the voice of Jesus from the Cross say to St. Thomas, “You have written well of me, Thomas; what reward do you want?”  St. Thomas simply replied, “Nothing but you, O Lord.”  On March 7, 1274 St. Thomas died on his way to the Council of Lyons.  He is the patron saint of students and universities.  One of the many contributions to the Church’s rich liturgical patrimony were the great Eucharistic hymns Pange Lingua and Adoro Te Devote.  Let us ask St. Thomas Aquinas to pray for us, that we may study and learn the Catholic faith well, and also deepen our love and devotion to Our Lord, most especially in the Blessed Sacrament!  A blessed and happy Catholic Schools Week to all of our teachers, students, and families!